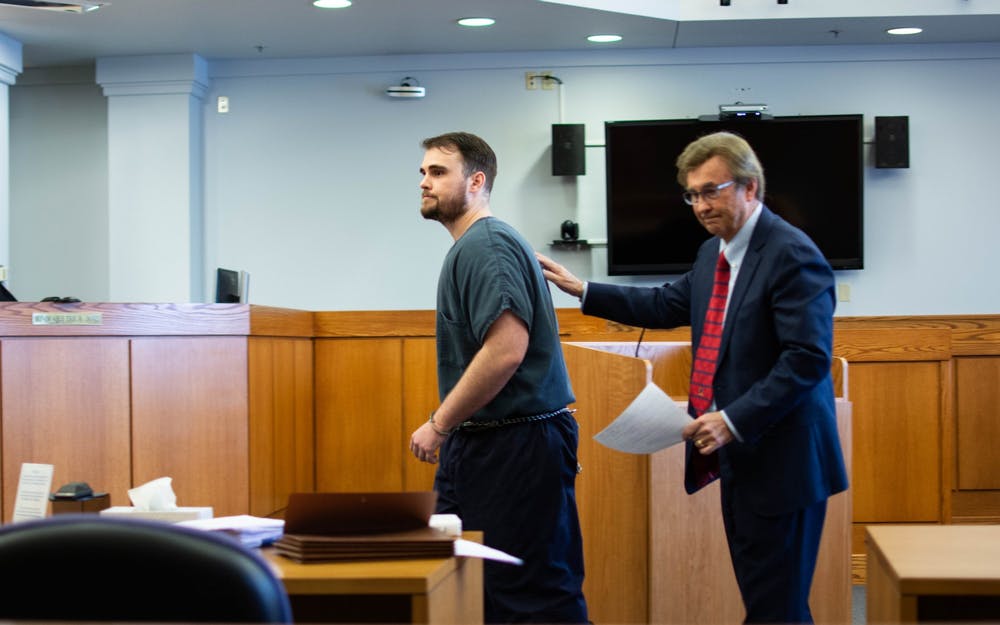 On November 26, 2019, I was emailed copies of 21 interviews from the Attorney General’s Office that were part of the internal investigation into the unethical behavior of former Assistant Attorney General Brian Kolodziej.

The Conclusion found at pages 23 and 24 of the Summary, states as follows:

The actual police report authored and signed by SA Karen Fairley, which included exculpatory evidence deleted in the “police report” submitted by Kolodziej.

The actual police report authored and signed by SA Karen Fairley, which included exculpatory evidence deleted in the “police report” submitted by Kolodziej makes it clear that Blackmore’s roommate, Brennah Donahue, stated that Landrea Blackmore told her roommate the same morning, approximately 11 hours after the alleged incident took place between Blackmore and Elliott, that Blackmore had voluntarily permitted Elliott to perform oral sex upon her person and then felt pressured into reciprocating. The same report reflected the fact that Blackmore told her best friend, Alexis Carlson, similarly that she had permitted Elliott to perform oral sex on her person and felt trapped into reciprocating when requested by Elliott, but that no physical force was involved when Elliott made his request. Matthew Dunnuck was reported by SA Karen Fairley to have stated that when he encountered Blackmore outside the bedroom, that she had just been in with Elliott, that she was sad but did not disclose what she was upset about, but spoke of her Christian walk with God and going back to church.

According to the Internal Investigation, all four of these witnesses were previously interviewed alone by Brian Kolodziej, who then later instructed SA Karen Fairley (the police investigator), to then interview the witnesses herself and prepare a police report based on her interviews (after such witnesses had been prepped as to what to say by Kolodziej.)

Kolodziej directed SA Fairley to tape-record her conversations with Donahue, Carlson and Dunnuck, but NOT Landrea Blackmore.

Landrea Blackmore’s testimony given under Oath on February 11, 2019, directly contradicted what these 3 witnesses stated in that she testified that when she was in a bedroom with Ian Elliott on November 16, 2014, she was seated on the bed and “had her clothes on,” when Elliott physically forced her to perform oral sex by grabbing the curvature of her neck and pulling it toward him in order to accomplish the oral sex. She then testified that this caused her to become upset and flee the bedroom “in a hysterical state” with everyone outside the bedroom asking her “what’s wrong Landy, what’s wrong Landy?”

Karen Fairley’s February 9, 2019 police report was specifically withheld by Kolodziej from the defense, and on February 11, 2019, when Blackmore testified, the defense was not able to cross-examine Blackmore regarding the statements she made to these 3 critical witnesses. Accordingly, when the examining magistrate determined that Blackmore’s testimony appeared credible, the examining magistrate was prevented from having this information brought out on cross-examination which directly contradicted her oral testimony.

Both Attorney General Nessel and Defendant Elliott’s Attorney, Joseph Barberi, have agreed that Kolodziej’s behavior in denying the Elliott defense team access to such exculpatory evidence acted to deny Elliott due process of law.

The Internal Investigation also confirmed Attorney Barberi’s previous allegations of unethical behavior attributed to Kolodziej when Karen Fairley documented the fact that when preparing Blackmore to testify “Kolodziej was asking Blackmore leading questions regarding the alleged act itself and presenting scenarios to Blackmore while demonstrating how Elliott “placed the hand on curvature of Blackmore’s neck with force and then asking Blackmore ‘wouldn’t you agree?’”…

During witness preparation when Fairley attempted to ask Blackmore questions, according to the Internal Investigation, Chief Deputy Assistant Attorney General, Laura Moody, stated, “this is Brian’s show.” Fairley stated that she was only permitted to ask Blackmore 2 questions during “the interview.”

Fairley’s interview in the Internal Investigation also indicated that “at one point during the Elliott hearings, it appeared as though Fairley was going to have to testify” [attorney Barberi was requesting that he be allowed to call and question Fairley as a witness regarding the March 5, 2019 motion he had filed seeking court sanctions against Kolodziej for Kolodziej’s unethical behavior]. According to the Internal Investigative Report, “Shortly before (day before or day of), her expected testimony,” “Kolodziej read to Fairley 4 pages of notes Kolodziej had prepared. According to Fairley, Kolodziej told Fairley ‘if you get called to the stand, this is what I want your responses to be.’ Fairley refused. Fairley told Kolodziej, ‘let me tell you one thing, these are your thoughts, not my thoughts, and I’m not testifying to your thoughts.’ Victim Advocate Rebecca [sic] Snyder was purportedly present during the conversation between Kolodziej and Fairley when Kolodziej told Fairley how he wanted her to testify.’”

On February 3, 2020, Attorney Barberi engaged in a conversation with the Kent County Prosecuting Attorney, Christopher R. Becker, who has been assigned the criminal investigation of Brian Kolodziej’s behavior as a former Assistant Attorney General in Ian Elliott’s case, as well as other cases handled by Kolodziej. Based on such conversation, until further notice, Attorney Barberi has agreed that the full Internal Investigation materials, other than those portions that have been referenced today, will not be released to the public at this time, and not likely in the future until such time as either further civil action is taken against Kolodziej or a decision as to any criminal action is made as to Kolodziej and/or others.

Consistent with the findings of the Attorney General’s Internal Investigation, it is clear that a number of individuals within the Attorney General’s Office, most notably Chief Deputy Laura Moody, were made aware of Kolodziej’s unethical behavior and in spite of such awareness, did nothing to corral an out of control Assistant Attorney General who was bent on obtaining a criminal conviction at all costs. Kolodziej’s relationship with complaining witness Rachel Wilson, according to interviews of both Wilson and Kolodziej became sexual in April of 2019 (the same timeframe, Attorney Barberi was complaining of Kolodziej’s unethical behavior.)

Knowledge of Kolodziej’s close personal relationship to Rachel Wilson, according to Rebekah Snyder (Victim Advocate for the Attorney General’s Office), was communicated on January 16, 2019, to other members of the Attorney General’s Sexual Assault Unit based in Lansing and Detroit. According to the Internal Investigative Report, Present at a January 16, 2019 meeting, among others was Chief Deputy Laura Moody, Appellate Chief John Pallas (now purportedly demoted), as well as Kolodziej and others. While Kolodziej’s actions were called into question, according to Snyder, “nothing changed after that day.” Snyder advised, “even after Kolodziej’s supervisors Donna Pendergast, Laura Moody and John Pallas were made aware of the problems that Kolodziej had with interacting with victims.” Snyder stated, “she felt as though Kolodziej blurred the lines between Victim Advocate, Investigator and Attorney.”

Snyder indicated that, “she was present when Kolodziej and Fairley would have intense arguments of how investigations should proceed.” Snyder said that Kolodziej would “listen to Fairley and then do things his own way anyway.”

As an example of the conflict between Kolodziej and Fairley, Snyder discussed when witness Landrea Blackmore was found. Fairley found a phone number for Blackmore and had a 2 minute conversation with her. Blackmore was living in Texas. Kolodziej then had a 4 hour Skyped interview with Blackmore and told Fairley to complete a report based off his information and his notes. Fairley refused to create a report on behalf of Kolodziej. Snyder said that he did not like that and “they had a big fight about that.” Snyder stated that she did tell one of Kolodziej’s initial immediate supervisors, Donna Pendergast, about Kolodziej’s meeting with victims and witnesses before Kolodziej began reporting to Laura Moody and then Laura Moody would tell others, including John Pallas, that “it was okay,” Kolodziej’s behavior “was fine.”

Unfortunately, the Internal Investigation into Kolodziej’s behavior did not extend to having an interview conducted with Chief Deputy Laura Moody, who after cancelling her one scheduled interview, eventually left the Attorney General’s Office, to purportedly take a position with the U.S. Attorney’s Office, Eastern District.

Attorney Barberi also praised SA Karen Fairley for being the one member of the Attorney General’s staff who consistently tried to properly conduct a fair, open-minded, investigation into Rachel Wilson’s allegations. “Barberi stated, “Fairley’s the real hero identified in this investigation. She was the one individual who was willing to stand up to both Brian Kolodziej and Laura Moody when it came to Kolodziej’s actions of improperly questioning witnesses.”

In closing, Attorney Barberi stated that both he and his client, Ian Elliott, are weighing Elliott’s legal options concerning the unethical behavior of Brian Kolodziej, as well as the failure of other members of the Attorney General’s staff who knowingly permitted such unethical behavior.